In 1980, the westside Ravenswood parkway ran its full width all the way down from Winnemac to Lawrence Avenue! That year the Chicago and Northwestern Railroad sold its headquarters, a huge brick building at the corner of Ravenswood and Lawrence, to Newark Electric. One of the zoning changes obtained by Newark was the installation of angled parking in front of their building,all the way from Lawrence to Ainslie. This was a huge loss of neighborhood green space.

Local resident Stephen Christy was concerned that Newark’s parking priority would ultimately be extended all the way to Winnemac, so he worked with a local excavator to fill the west side parkway from Ainslie to Winnemac with thousands of tons of earth, thus preventing an easy conversion of the parkway to angled parking. A contractor graded and seeded the area. Two huge cottonwoods were saved as well by a local businessman who donated the labor to build the protective retaining walls around them, using large blocks of repurposed concrete donated by the contractor.

All was fine until 2013, when Metra and the Union Pacific Railroad rebuilt the tracks and had to destroy the entire area! Working with the landscape firm Futurity Inc., Stephen createdthe new design which you see today.

The new park, between Winnemac and Ainslie Avenues, christened Winnslie Parkway, continues to be maintained and enjoyed by local residents as well as Metra commuters, dog walkers, and nature lovers from the Ravenswood, Lincoln Square, Bowmanville, and Andersonville communities.

Photo from Stephen Christy of the SW corner of Winnemac and Ravenswood, Spring 1999. This landscape grew-in until 2013 when it was demolished for the Railroad expansion project. See the Youtube movie to see how it looked in 2013 before the demolition. If you see this corner in the 2013 video you'll notice that many of the evergreen trees had to be removed after they grew too thick and blocked the pathway.

Click on photo to see a larger image. Photos in this gallery are of the Winnemac-Ainslie Parkway from the Spring of 1999. Photos courtesy of Stephen Christy. (Other historical photos are welcome, please send to winnslie@gmail.com) or contact us. 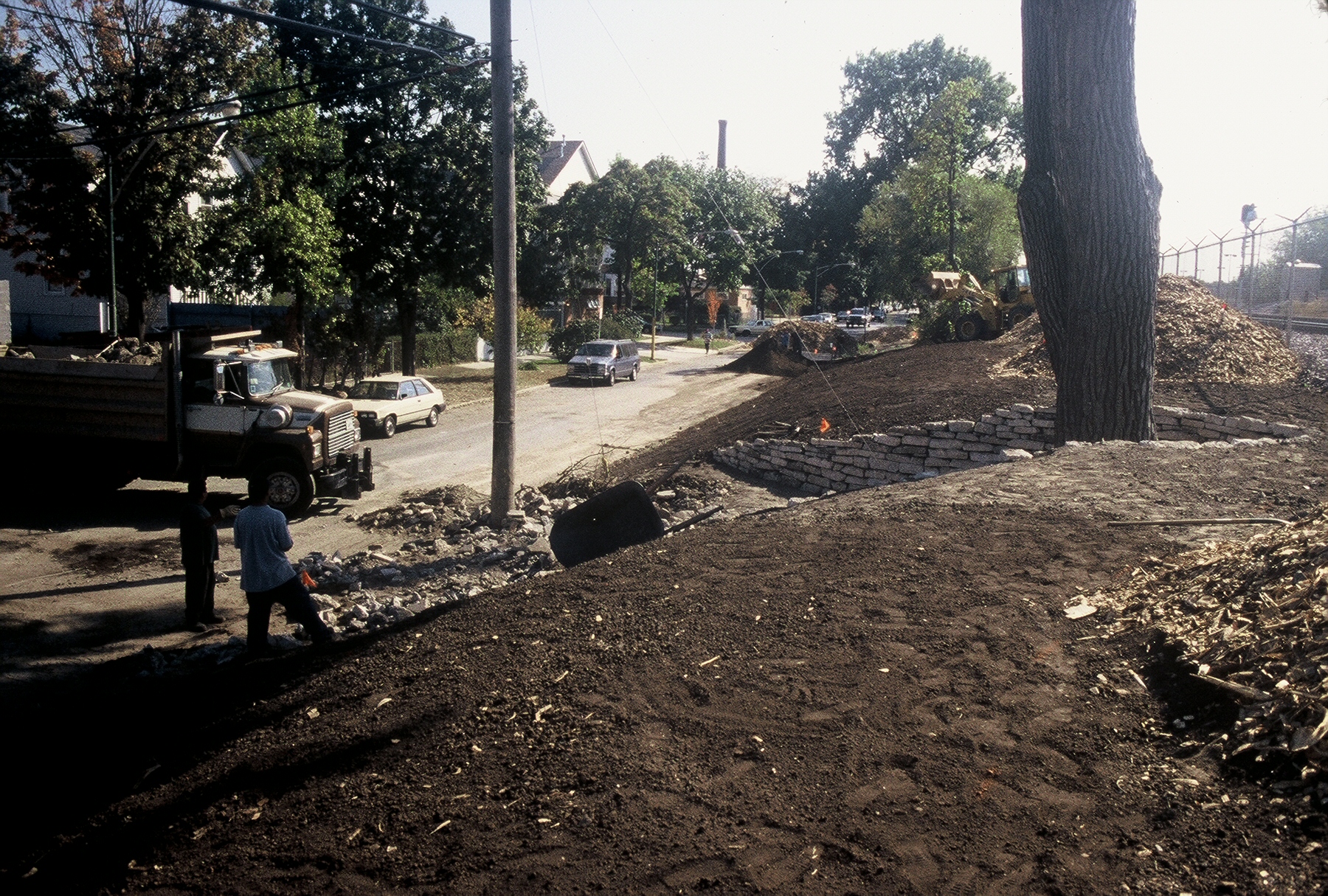 Spring 1999, Winnslie Parkway across from 5003 N. Ravenswood Ave. showing large cottonwoods that used to be there. 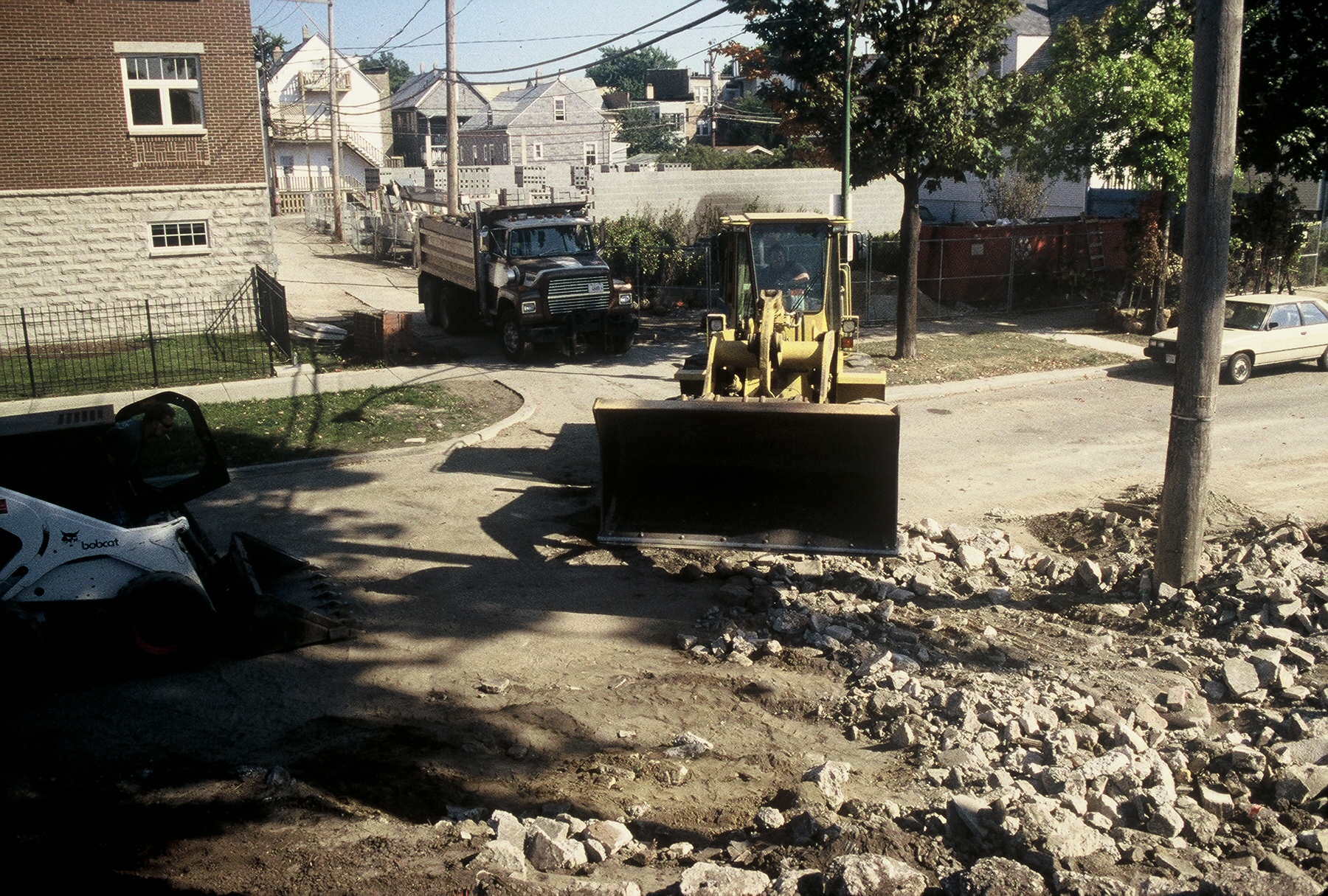 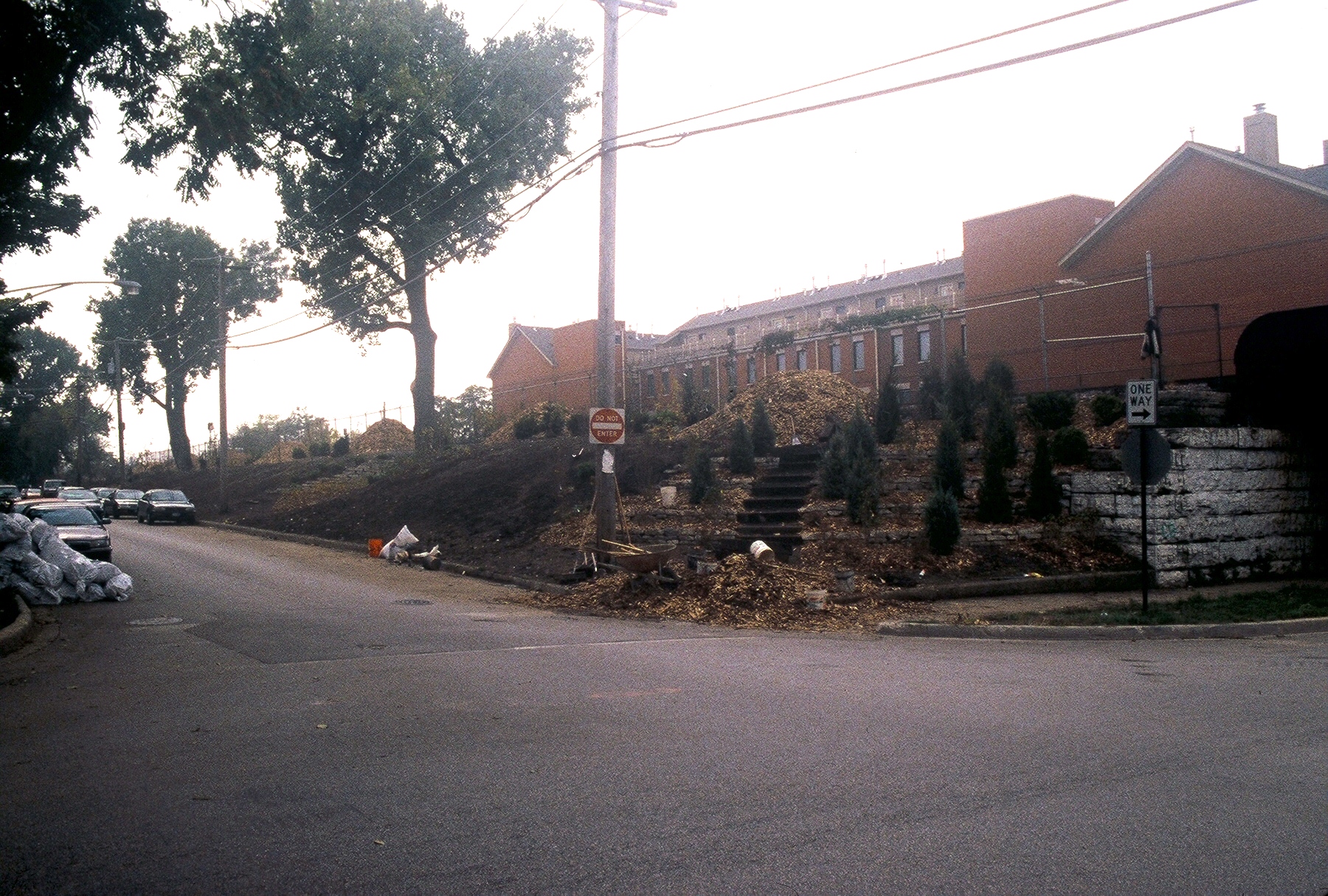 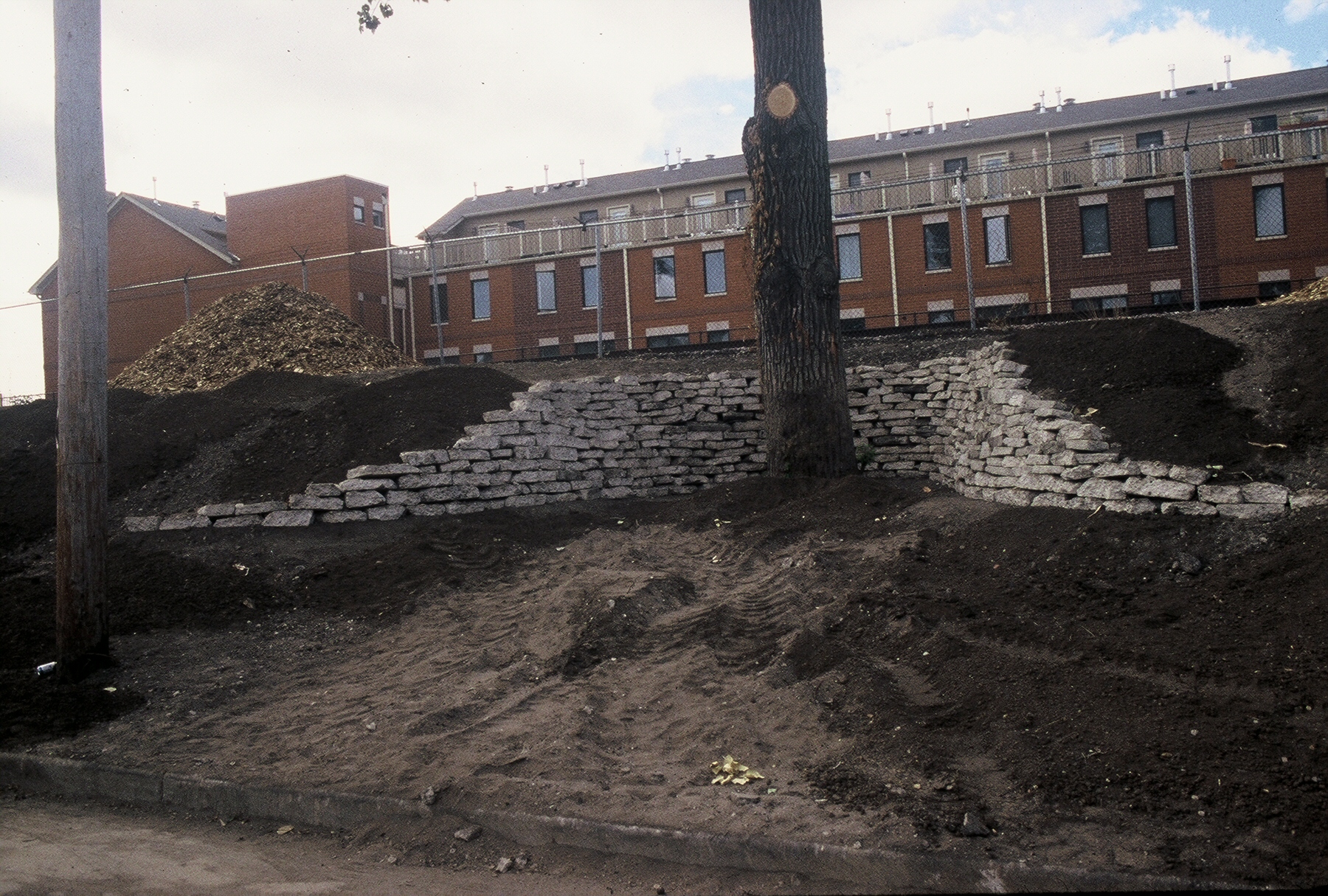 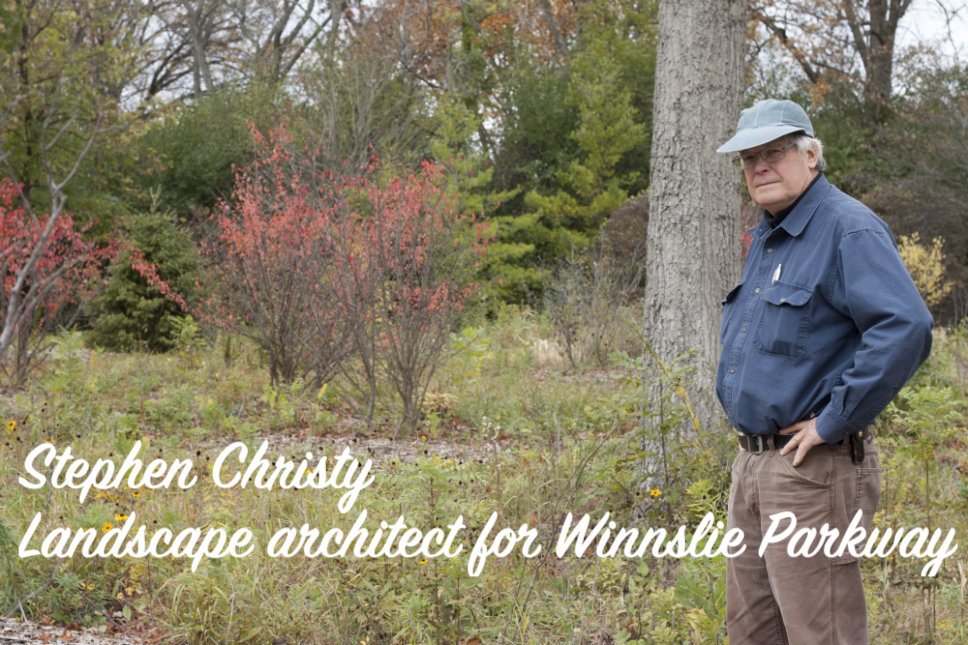 The Greening of Ravenswood

Winnslie Parkway is just one small section of a much larger project involving the greening of the entire Ravenswood community, including the Ravenswood Industrial Corridor. This work, started under the leadership of 47th Ward Alderman Gene Schulter is known as the "Greening of Ravenswood", and has gone on for decades. We hope to see it continue and expand as Ravenswood develops in the future. The names and photos of some of the organizers, volunteers, and donors including John Klonder, Stephen Christy, Fred Schanmier and others, are in the gallery below. 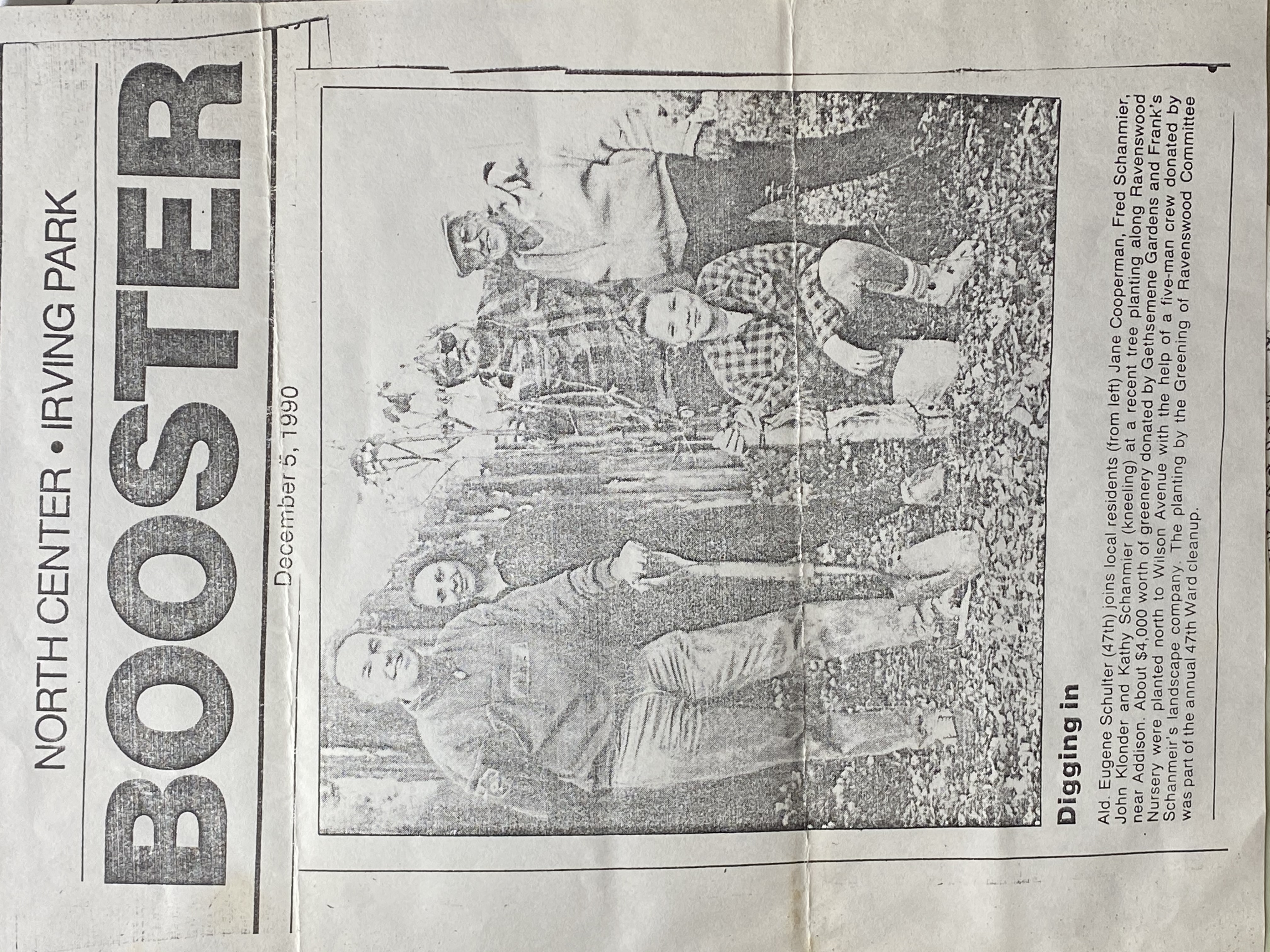 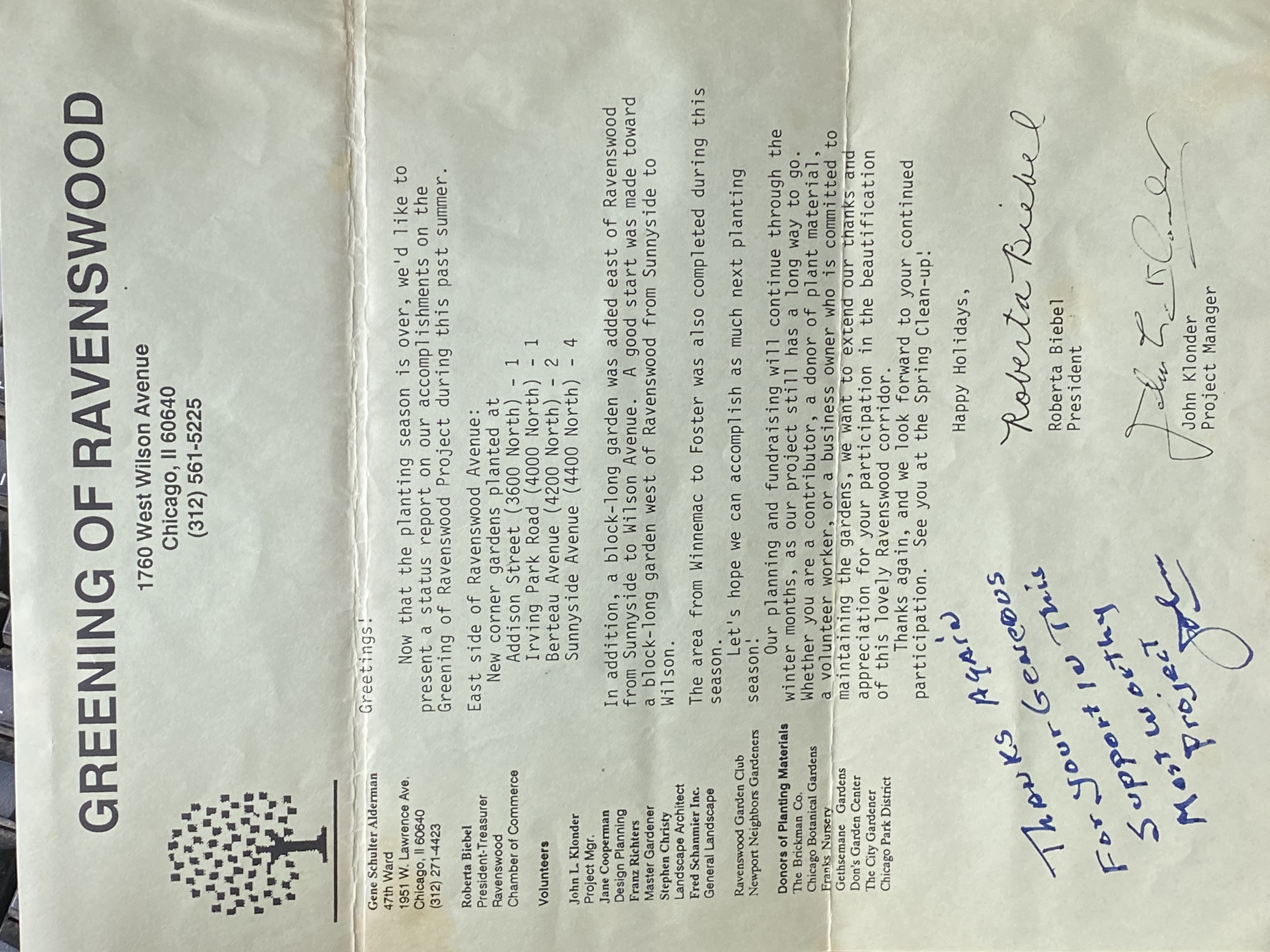 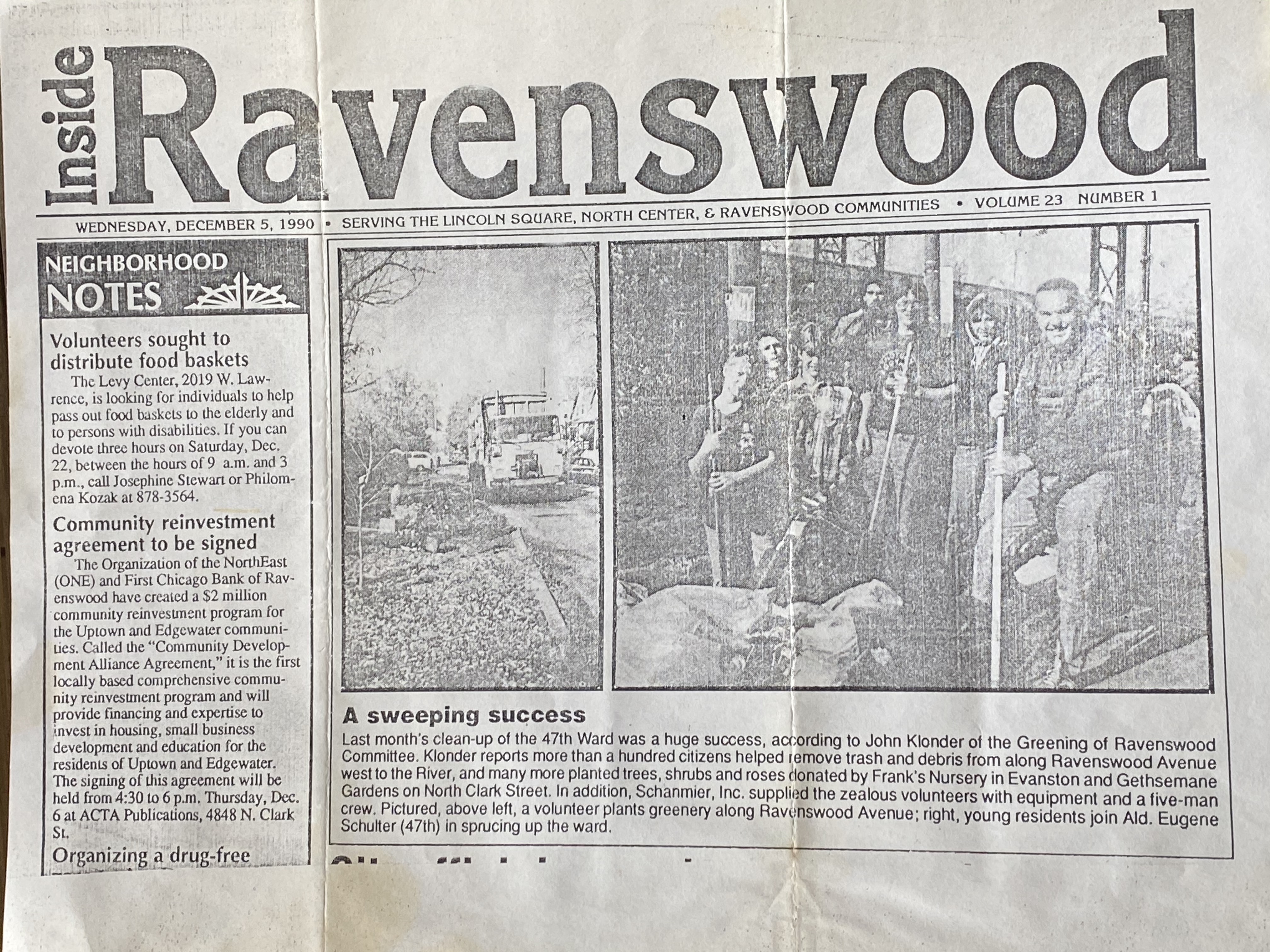 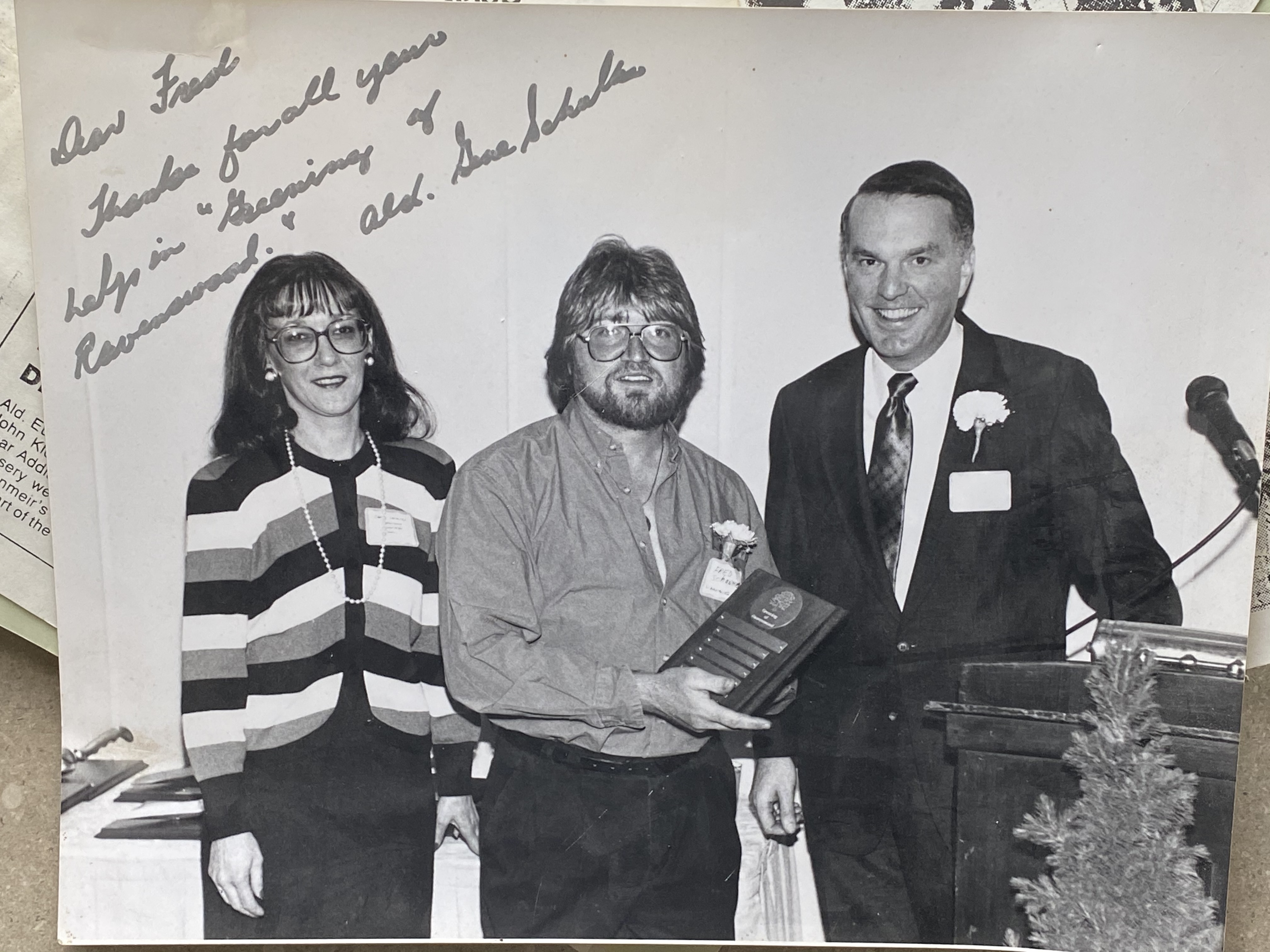 Award given to Fred Schanmier by Alderman Gene Schulter 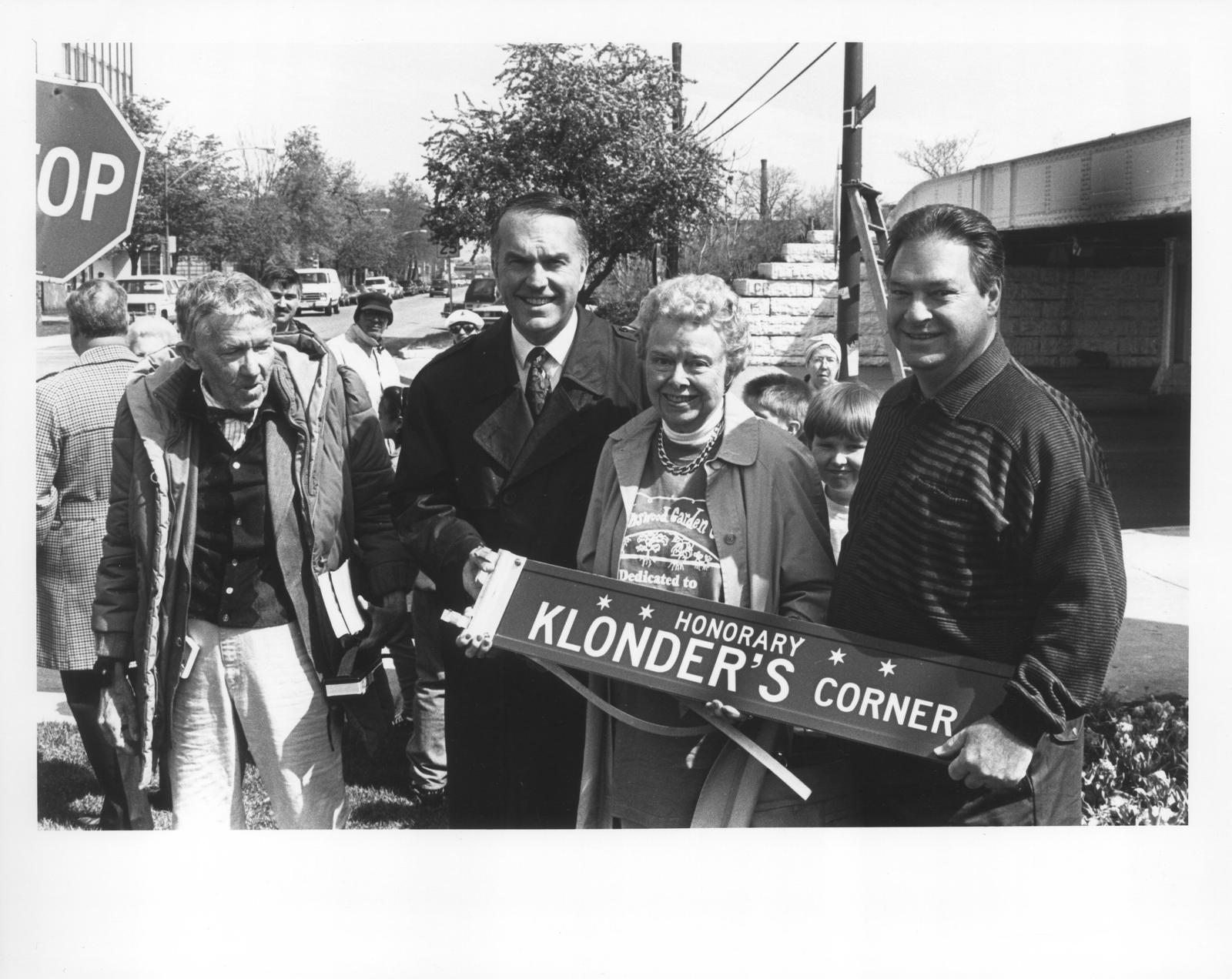 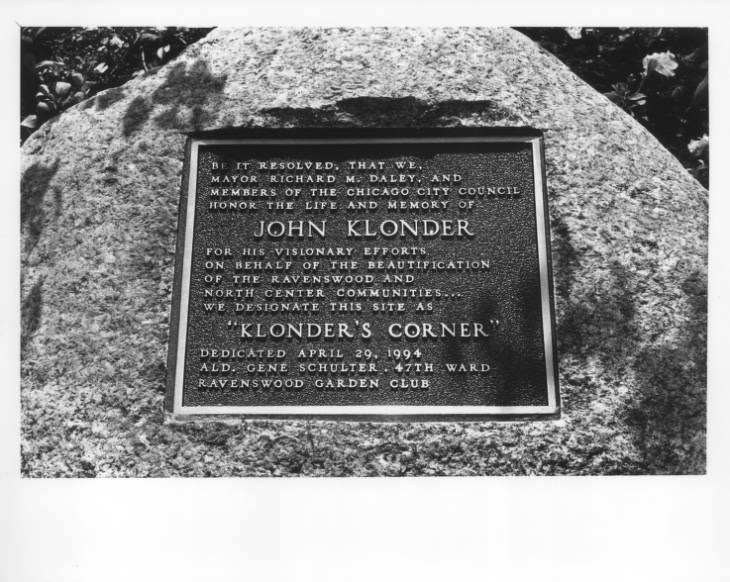 The board of Friends of Winnslie Parkway